It's Columbus Day and that means that since I: 1. Work for the Federal Government and 2. Make the work schedules, I have the day off! Hubs is at work and the girls are at school so I decided I'd have a nice lazy day, since I'm usually running around like a crazy person on my days off. Well, relaxing this has not been, this is the first time I've sat down today. I don't know why I have such trouble not doing something, but I do. I've gone to the grocery store, started chile verde and bean for dinner, put bread in the bread machine (first time), made kale chips (also the first time), did my 30 minute run, showered, vacuumed, and done 4 loads of laundry. I feel accomplished so now I'm relaxing!

Yesterday I had to work the Big Fresno Fair for work and hubs came with me to keep my company. He is a bad influence!! We ended up eating a TON - a cinnamon roll for me, chicken strips and fries for him, Dippin' Dots, beef jerky and kettle corn. Super yummy, but I felt gross when we got home. We also ended up buying something that I resisted buying for years and years even though the booth was right next to mine, but with hubs there we ended up getting one each, a Pure Energy Band.

So the Pure Energy Band spiel is
The green and silver colored hologram discs are embedded with Pure Energy's custom range of natural frequencies believed to resonate through the body and promote a healthier well being. The Weight Loss + Energy Band may help to:

Hubs got the one that is supposed to reduce pain since his arthritic knee has really been hurting lately. He's going to meet with a surgeon on Wednesday and wants to avoid getting a new knee since he's only 40! We also bought a Christmas present for my mom.

The one bad part of the day involves the fact that a lot of people really suck! Hubs is addicted to an app on his phone and started killing it so he decided to buy a wall charger. So he went to the restroom and set his phone down because it tends to fall out if his pocket (remember this part) and then went to buy a charger, he came back to the booth to plug in his phone and realized that he hadn't put it back in his pocket, he booked it to the restroom and it was gone. We were both pretty upset! He reported it to the police and they laughed about the chance of anyone turning in an iPhone 4, unfortunately they were right! So now hubs is going to get the new 4S on Friday. I'm bummed we have to spend the money, but excited to see the last product that Steve Jobs saw to fruition.

Nothing else new going on here, but I'm bummed to say that it's getting back up into the 80's. I have a bunch of scarves and I learned a bunch of new ways to wear them and want to bust them out!! This is what I wore Friday and I LOVED it. So ready for fall to really be here!! 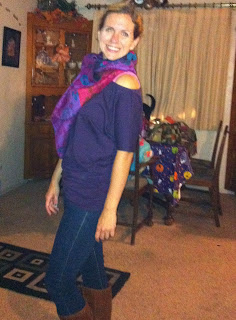 Excuse my glowing eyes and the quality, it's a late night
iPhone picture taken by my 9 year old
Posted by Nicole at 12:28 PM