I survived Thanksgiving! It was a long and great couple of days! We headed to my parents and had dinner. In hindsight, I probably shouldn't have eaten a tamale, rice and beans the night before a race. My tummy didn't feel right all night after or when I woke up yesterday morning. After that mini me opened her birthday presents and loved them! 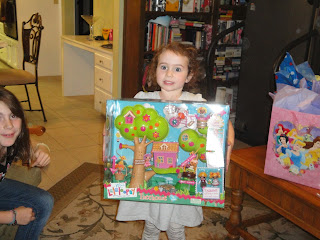 I love how crazed she looks here!!
Then we sang and had cake 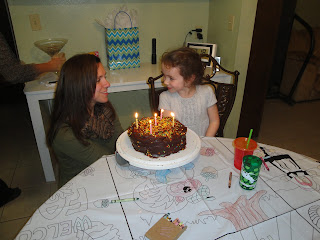 This picture makes me so happy, I love my mini me!
Then we played with her presents and got the girls ready for bed. Since they were all sleeping in the same room, with the two little ones sharing a bed, sleep was a long time in coming! We watched Insidious while waiting for the girls to go to sleep and I ended up awake until after 11 (which is late for me on any day!). Then my parents grandfather clock makes noise every 15 minutes and their dog ran around the house all night, not a good night's sleep!

I got up at 5:50 and got dressed, then hubs and the girls all got up and dressed before I left at 6:50. I got to the race and got registered and FROZE while waiting. 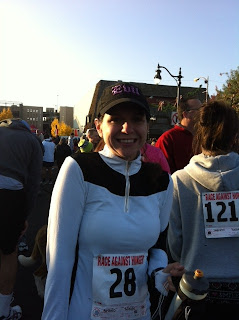 SO COLD!!!
The whole family came and gave me hugs and kisses before the race. 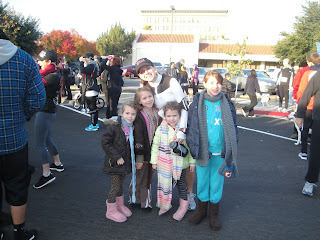 Me and my girls pre-race
This race was different than any I've run, I've only done small races thus far and this was big (to me) with over 1,600 runners and at least 1,000 walkers. The walkers and runners had different routes, we went opposite ways down the same street. There were tons of people with strollers and dogs, I saw at least 100 dogs (although hubs says there were only about 25...) They were registering walk ins until right at 8, which meant they were starting late, and then someone sang the National Anthem and she said "let the race begin," which I think we all assumed meant runners go to your area and walkers go to your area. My friend and I started moving to the runners area and trying to get in front of all the people with dogs and strollers. Then I heard cheering up by the start line and people were running!! Thank goodness it was chip timed so it didn't matter that I didn't get through for quite a while. Then I had to run through people for the first half mile(ish), I don't know how far it was because I was so thrown off by the non-start that I forgot to start my Garmin (boy was I dumb!!). So I was running without any idea of how fast I was going or how far. There were no markings along the way either!! I had wanted to finish in 27 minutes or less, but was a bit thrown off by the naked running so I just went with it. In hindsight I definitely could (and should) have pushed a lot harder. I turned the last corner and saw my parents and the girls, I waved at them and was so thrilled! I saw hubs right past the finish line, but he didn't see me!! So no finish pictures from him, oh well! I didn't end up under 27, but finished in 27:52, which I'll call a win since it was less than 28! It's also a PR since my only other 5K was 29 minutes. 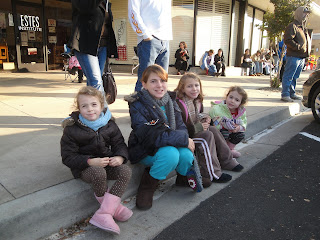 The girls waiting for me
After the race we went back to my parents house. 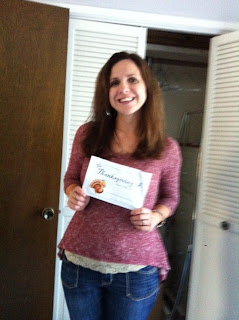 I forgot to take a pic with my Thanksgiving 5K bib until after I showered
Lots of cooking was done. Then lots of eating was done. 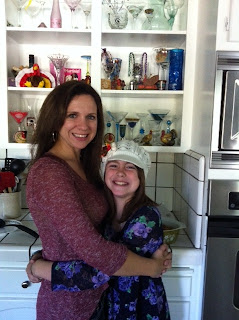 Me and my biggest girlie while cooking
We rode bikes around the neighborhood for a bit, all the little girls don't know how to ride without training wheels yet and the bikes at my parents don't have them, so riding consisted of a lot of us holding the bikes while running beside them, quite the workout. 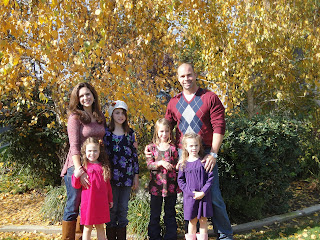 All of us
We headed back home and dropped the girls with the other parents and went to see Breaking Dawn. I enjoyed it, but started feeling crappy about halfway through. By the time the movie ended hubs and I both felt yucky so we headed home where I promptly fell asleep while watching a movie and went right to bed after. I still feel craptacular today, I just keep fighting this ickiness off, but have yet to get rid of it fully. The plan is to go to bed early and hopefully feel better tomorrow...

Hope everyone is having a great weekend.

Question of the day - Did you do a Turkey Trot? How'd you do?