I finally got out of bed at 3:15 on Sunday, I had to go show my proof of time to get my corral changed and she said to be there before 4:30 so that it wasn't too crowded. So I got up and started getting myself together. I took a few mirror pictures since I was the only one awake.

Why yes, I do look dead tired!!
My legs and feet weren't hurting like they had been the night before so I was quite pleased, I had been really freaked out when I went to bed about how they felt (I had even slept in my Pivot shorts and compression sleeves, I need socks for my poor feet). I got everything together and headed out to walk to the race. It took me about 5 minutes or so to walk there and I saw so many friendly Disney employees around who wished me luck, it's so great that they are just so nice (whether it's because they want to be or are forced to be, I don't care I really enjoy it). When I got to the information booth I sought out the same woman and she promptly moved me to Corral A after seeing my 10K time. That freaked me out a little bit and made me feel more confident at the same time. She saw that I was scared and reminded me to go at my own pace and I said I had planned to do an 11 minute mile for the first mile and she said that was a good plan.
I left her and wandered the holding area. There were tons of porta-potties so I went and then I got a water and ate 2 Clif Shot Blox. I sat down and waited until the sent Corral A out to the road, I went to the bathroom again and headed out. From the time I left my room to when we hit the street the temperature must have dropped at least 5 degrees, I was getting really cold and I was glad to have my throwaway jacket and my sleeves. One of the Brightroom photographers came and took my picture and I took my jacket off for the first time, I got lots of compliments on my costume then. There were tons of cute costumes everywhere - lots of Tinks, Alice in Wonderland, Rapunzel (complete with a knee length wig!), Cinderella, Aurora, Pocahontas, and then just people with tutus and sparkles on. It was a really great atmosphere. The announcers started talking and had Megyn Price come up, she was the celebrity spokesperson for the race, and she made me cry talking about wanting to run to show her 4 year old daughter that she was strong. Then Sean Astin came out and talked about his daughters and I cried some more. I was reminded not just of how excited I was to run this race and show my girls how cool it is to be strong, but also that I was running this race for Team Gab. About that time I started shivering and my teeth were chattering, not because I was colder, that is my nervous reaction.
The National Anthem was sang (I may have cried a little more) and I threw my jacket and moved to the center of the road. I stayed in the back half of the corral so that I wouldn't go out too fast.﻿ The countdown started and then we were off. It was so crowded for the first mile that I didn't need to worry about going out too fast! I was trapped in the middle of a pack and ended up with an over 12 minute mile. We got into Disneyland and it was surreal, I loved seeing it empty. Because I had been standing on the road for about 45 minutes and had drank a bit more water than I usually do I realized that I needed to go in Disneyland. So I decided to just do it before it got too bad (I've never stopped to go on a long run before, but I think my nerves got the best of me) I lost nearly 2 minutes there since I had to wait for a stall and then go. My first 5K was SLOW, 34:45 11:11 pace. I started picking up once we were back out on the street. There wasn't much to see for a while, but then we started running into the marching bands and the cheerleaders and that was fun. I was feeling really great, walking through the water stations and trying to up my pace to make up for the slow start but still save some for the finish. At the 10K mark I was at 1:06:47 for a 10:45 pace. Once I saw the 7 mile sign I realized I was over half done and was feeling great. I knew I could do it and have a respectable time! I hit the 15K at 1:36:53 for a 10:24 pace and was feeling really good. I decided that at 10 miles I wouldn't go about a 9 minute mile and I stuck to that pretty well. Just before 13 miles I finally pulled off my sleeves because I got warm and needed the wind on my arms to cool me off. Right after that I saw the most wonderful sight of the morning; hubs, mini me and little bitty were there cheering for me.

Waving at my babies and trying not to cry
After that I just tried to turn it on, I knew I was almost there. I rounded the last corner and saw the finish and sprinted for all I was worth. I ended up with a 2:12:39 for a 10:07 pace. I gave Goofy a high five right before I crossed the line and was happy and feeling pretty good. I saw Sean Astin being interviewed (he beat me by about 3 and a half minutes!) and then got my medal and started walking to the water. Right before I got there I saw my parents and the big girls. It was so great!! I grabbed water and a Luna Protein bar and headed toward the family. But, before I got to them I got stopped by another runner Carrie of This Mama Makes Stuff, whose tutorial I used for my costume! She took my picture and I hugged her (I'm a dork who hugs strangers, especially when we both just ran 13.1 miles)﻿. 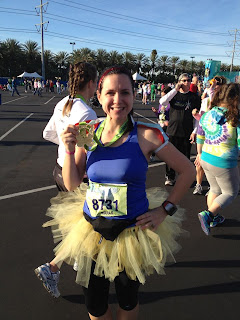 That's me and my medal
Statistics -
1244 of 9386
249 in my age group which was 49.8%
After we were all back together I wanted to go back to the hotel to shower, the girls wanted beignets so we separated. While walking back to the hotel my legs started to get tight and my left knee was really hurting. I took a quick shower, which is when I noticed the horrible chafing I had under my arms. I have a silver dollar size patch under my left arm and a huge (larger than a deck of cards) patch under my right arm. It hurt a lot when the water hit it! I had felt rubbing when I was running but thought it was my top and kept pulling that around, I never put two and two together that it might be my sleeves rubbing!! After that I packed everything up so that we could head into the parks as soon as they got back to the room. They got back and we loaded the car and headed in to CA Adventure to ride everything we had missed.

Why yes, I did wear my medal all day!
We got a ton of rides done, including bug's first time on California Screamin', had corn dogs for lunch and headed back to the car just before 1. There was a ton of traffic getting out of the city but then it cleared up and we got moving. We stopped about halfway home for gas and to have a potty break (and load up on some munchies). Then we were on the road again. About 50 minutes from home little bitty puked up everything she had eaten all over in herself, on her booster seat, and in the puke bag I held up. We stopped and cleaned up as best we could and made it almost home before she threw up a little more.  We dropped all the girls off with the other sets of parents and headed home. I took a bath and washed clothes and we just relaxed.
Yesterday my legs hurt a lot! I decided not to run and let them rest, I'd already let my streak go when I didn't run on Friday so there was no reason to push it. I'm going to try to run a couple of slow miles tonight and then tomorrow it's time for something else!! Maybe some bodyrock.tv!﻿
Posted by Nicole at 12:45 PM