End of the Trail Half Marathon Recap

I was not expecting big things from this race since I didn't prepare, at all, the farthest I had run since the Tinker Bell Half in January was 6.5. I also hadn't run much in the last week since my big girls were out of school the week before so I only ran a bit with them. Add to that the fact that I changed my diet in the last two weeks and was unsure of fuel, pre and during race, it added up to a big nothing.


Packet pick up was yesterday at the local running store and it was a bit of a mess, I got in the line I was told to get in, waited and then was told I had to wait in the other line. Then, I was told they ran out of shirts, which wasn't the end of the world but didn't please me.


The three big girls and I then went and spent the night at my parents house. We had tacos (mine was meat and salsa on greens), they had brownies for dessert and I had a Larabar. We watched Hook and then we crashed. I slept great until 3:30 am and then I was mostly awake until my alarm went off at 5:30. I got up and had a cup of coffee, using my parents amazing Kuerig - I MUST have one, and ate another Larabar. It got things moving and then I headed out to the race site. 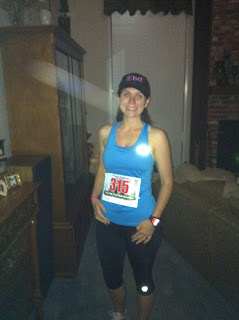 I was annoyed that we had to pay the $6 entry fee to get into the park where the race was starting and finishing, I've held events and you usually can get fees waived or included in your permits so those who already paid for races don't have to pay again!! I met up with my friend Michele, after going to the bathroom again, and we hung out in the FREEZING morning air.

The race was "chip timed" but there was no pad at the beginning... I'm not sure how that worked. I used my Garmin so I'm not too worried about it. The first few miles I felt amazing and had to keep slowing myself down. It was a really boring course filled with out and backs on country roads. About 7.5 miles in I was DONE! I kept thinking it would be nice to trip in one of the pot holes I had been watching out for so that I could stop. At about 11 miles I started walking 1 minute for every 4 I ran just to keep moving. I was POOPED!! I made it in at 2:19, not a horrible time, but not a time I was hoping to see!! My mom and the girls were at the finish waiting for me so we got some good finishing pictures. 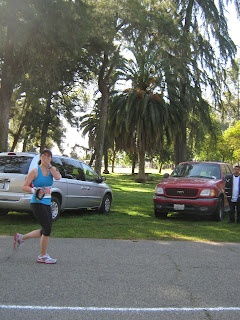 Blowing kisses to the girls 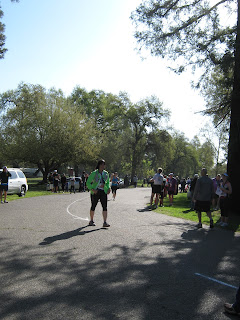 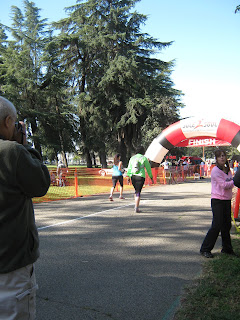 I got my medal and my finishers hoodie and hat and the girls and my mom were upon me. I was feeling a bit dizzy so I plopped on the grass, which made it picture time! 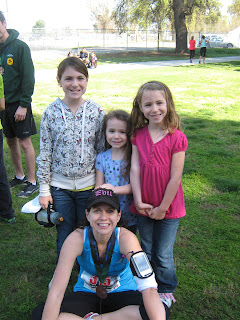 After that we wandered through the expo and grabbed some fruit and free Starbucks (score!!) and took a picture by the statue that the race gets it's name from. 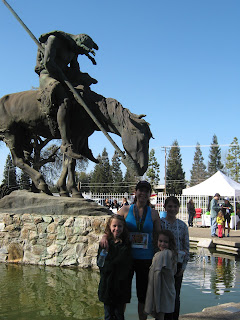 Bug is wearing my finisher's sweatshirt 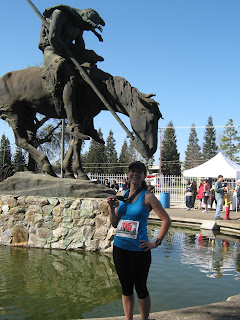 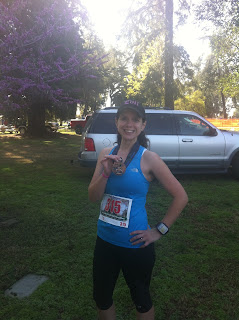 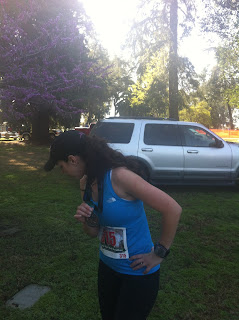 I had to share this outtake, because I had just finished saying I saw the hole and wouldn't fall, when I almost fell!
Michele had already left when I finished because she ROCKED, she finished in 1:46! I have to say I was glad to have finished as quickly as I did because they ran out of sweatshirts and hats! I think that is crazy!!

All in all it was a great race and I would definitely run it again!! Even though the course is boring! It's a great price, $56, and too close to home to pass up.

When I got home I took glutamine and an ice bath and I've been wearing my compression sleeves and I'm feeling good. We'll see what the morning brings as far as aches and pains. Tomorrow I'll be back with my plan of action to get a PR at the half in May (that I've yet to actually sign up for...)

DISCLAIMER: I feel it necessary to state, that this race was not expensive so I don't expect all the things they handed out, BUT I do expect that if you pre-register at least 2 weeks in advance (or whatever predetermined date set by those in charge) you should get the things you paid for when it is promised to you.
Posted by Nicole at 8:31 PM